Tracadie, October 23, 2018 – The Fondation Les Amis de l’Hôpital de Tracadie is launching its first major campaign whose objective is to raise $950,000 for the Tracadie-Sheila Hospital by 2021.

The theme chosen to represent this positive and unifying campaign is Improving health care services in our region. Funds raised will help finance two projects, namely the modernization of the Dialysis Unit and the creation of a chronic disease management clinic. The projects are valued at over $1.5 million.
“Fondation Les Amis de l’Hôpital de Tracadie is a key partner of the hospital. Over more than 30 years already, we have made numerous improvements from an investment of more than $4.5 million. We are reiterating our support of the hospital by sponsoring this Major Campaign project,” said Philippe Ferguson, Chairman of the Board of Directors of Fondation Les Amis de l’Hôpital de Tracadie.

“This $950,000 campaign is much more than a financial objective, it’s a community project. I’m very proud of the people who are joining the volunteer team, which is continuing to grow, like a big family. I’m convinced that their commitment and energy will be determining factors in the campaign’s success,” said André Morais, Chair of the Major Campaign Committee.

This launch is also an opportunity to highlight the first major donation, which sets the tone for this large-scale campaign. The Coopérative Régionale de la Baie de Tracadie Ltée officialized its $500,000 donation.

“Thanks to the Loto Coop Santé communautaire lottery, launched in 2003, coop members, the Foundation and several other organizations in the area shared a total amount of nearly $7 million. Therefore, when I support my coop, I also support my community,” stated Mr. Pierre Ferguson Chair of the Board of Directors of the Coopérative Régionale de la Baie Ltée.

The dialysis program is a very important peninsula-wide service. Currently, 36 people rely on this vital service, but unfortunately there are still seven people who have to travel to the Chaleur Regional Hospital an average of three times a week, which amounts to more than 25,000 km a year. We can all

imagine the impact on their quality of life and the financial burden for them and their families. Here is the summary of the proposed project for this program:

The chronic disease management sector is a developing sector intended to meet growing needs. We already know that our aging population requires health care and services over longer periods and often suffers from more than one chronic illness. Travelling is not always easy, which explains in part why people do not always show up for their appointments. The rate of people not showing up for their appointments ranges from 16% to 20% depending on the department. Had these people met a health professional, they could have avoided a deterioration of their health. Access to health care and services in the region is therefore very important. Here is a summary of the proposed project for this new sector at the hospital:

To better explain the benefits of the projects, two service recipients from the area expressed their recognition. Natacha Caissie-Blanchard, chronic disease management sector patient, and Sonia Haché, Dialysis Unit patient, agreed that the care, support and information that they received right here, at the Tracadie Hospital, had a significant impact not only on their quality of life, but also on their finances because of their reducing travelling.

“This initiative will allow the Network to improve the delivery of specialized patient care and services while providing our staff with a healthy and safe work environment. Many thanks and congratulations to the Fondation Les Amis de l’Hôpital de Tracadie which, through collaborative effort between volunteers, employees and the support of the generous donors, is celebrating its 30th anniversary today. – Gilles Lanteigne, President and CEO of Vitalité Health Network. 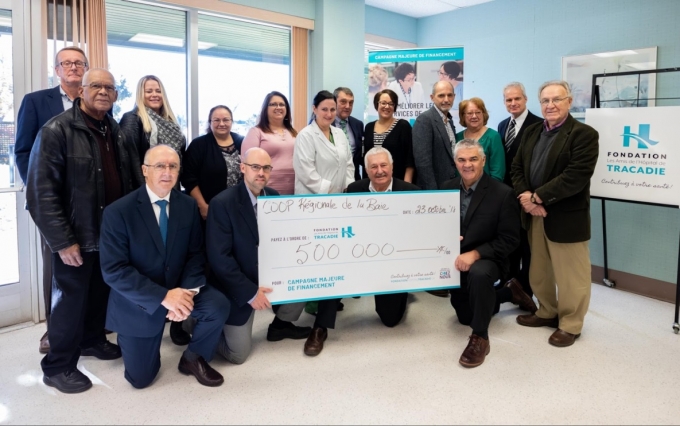